A History of Technology, Innovation, and Supporting the Warfighter

Exquadrum, Inc. was founded by innovative entrepreneurs, Kevin E. Mahaffy and Eric Schmidt, in 2002. They both came out of ten-year civilian careers at the Air Force Rocket Propulsion Laboratory (variously known as the Air Force Astronautics Laboratory, Phillips Laboratory, and Air Force Research Laboratory). Kevin spent his last three years at the Laboratory as the Chief of the Solid Rocket Motors Branch, while Eric developed liquid rocket technology and led the refurbishment and buildup of the large rocket test stands that once tested the engines for the mighty Saturn V moon rocket. 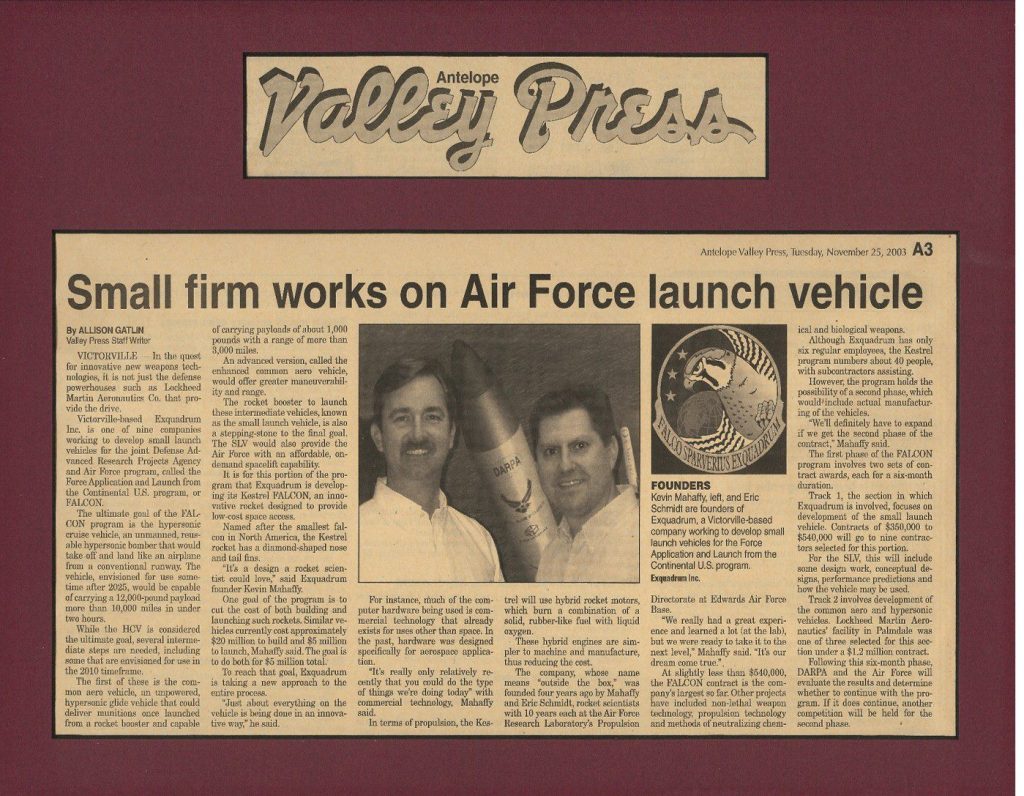 It was a key moment in the company’s history when Eric and Kevin formulated the name Exquadrum based on their shared admiration for the ancient Latin language. The name, Exquadrum, embodies the idea of “Thinking outside the box”, which captures the company’s focus on leading-edge innovation.

Exquadrum’s founders used their experience from the Air Force Rocket Laboratory to optimize the company for rapid technology development using the approach of vertical integration. Team Exquadrum can rapidly innovate, design, analyze, fabricate, and test new technologies all within its own facilities.

Exquadrum has worked exciting projects throughout its history. Soon after its founding, the company was awarded a prime contract from DARPA to design a small launch vehicle on the FALCON program.

In 2013 after only nine months of development, Exquadrum demonstrated a stable, 60,000 pound thrust hybrid booster for Virgin Galactic. Exquadrum recently concluded a $15.1M prime contract for DARPA on the Operational Fires program to develop a rocket booster for a hypersonic missile. Exquadrum’s work resulted in two full-scale, full-duration rocket tests of the technology.

Exquadrum’s history has only just begun and the best is yet to come!