Counter-terrorism tools to be tested at SCLA

Home  :  Press Releases  :  Counter-terrorism tools to be tested at SCLA

VICTORVILLE – Kinetic fireballs that can neutralize biological weapons and infrared decoy flares that are nearly invisible to the naked eye are among the counter-terrorism tools Exquadrum plans to start testing soon at four abandoned military bunkers in Victorville. 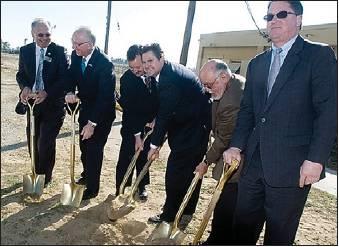 “With all of the problems we’re having nationally, fiscally and with high unemployment, it’s great to be at a groundbreaking for a company that’s growing,” Congressman Howard P. “Buck” McKeon told the audience of dignitaries and community members who piled into a tent alongside one of the bunkers at Southern California Logistics Airport on Thursday afternoon.

Exquadrum will use the new site to fulfill a number of contracts with the Department of Defense, including covert countermeasures to protect helicopters and space-based propulsion for strategic missile defense.

The company is hiring 10 new engineers to its 20-person team as it relocates from Adelanto to bomb blast rated bunkers at Victorville’s former George Air Force Base.