The Defense Advanced Research Projects Agency (DARPA) and the U.S. Air Force have awarded a contract to Exquadrum, Inc for the first phase of the Force Application and Launch from the Continental U.S. (FALCON). Exquadrum is a small business with extensive experience in the field of commercial and defense aerospace. 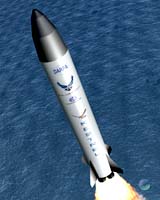 The FALCON program objectives are to develop the capability to project power from the continental United States of America to any point on the globe in less than two hours, as well as provide a truly low-cost means to launch satellites into low Earth orbit.

“This capability would free the U.S. military from reliance on forward basing to enable it to react promptly and decisively to destabilizing or threatening actions by hostile countries and terrorist organizations,” according to a DARPA contract solicitation.. The program will also seek to develop a responsive and low-cost system for small satellite launch.

Recent military engagements in Bosnia, Afghanistan, and Iraq have underscored both the capabilities and limitations of United States air forces in terms of placing ordnance on military targets. The current and future international political environment severely constrains this country’s ability to conduct long-range strike missions on high-value, time critical targets from outside CONUS.

This restriction coupled with the subsonic cruise speed limitations of the current bomber fleet translates to greatly extended mission times. Consequences include failure to successfully engage and destroy a large subset of high value, time-critical targets, severe reduction in the tonnage of ordnance that can be placed on targets within a given timeframe, and excessive physical and emotional fatigue levied upon bomber crews.

Exquadrum’s founders, Kevin Mahaffy and Eric Schmidt, developed their approach to the program from over twenty years of combined experience as researchers at the Air Force Research Laboratory’s Rocket Propulsion Division at Edwards AFB, CA. During the FALCON program, Exquadrum will be designing an innovative small launch vehicle called the Kestrel FALCON.

This vehicle will be propelled by hybrid rocket motors, which burn a solid, rubber-like fuel in combination with liquid oxygen. This design employs a number of creative strategies to produce a reliable yet low cost rocket. At the conclusion of this Phase I contract, DARPA and the Air Force will decide whether to proceed with Phase II, which will be a 36-month design and development effort.

Exquadrum’s corporate name means “outside the box.” The company’s “outside the box” approach is a critical element of its vision to be a key producer of innovative technology for government, military and industrial customers. The company is currently working on research and development projects for a number of corporate customers. 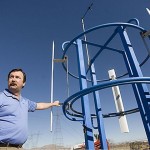 Next Story:
Building the world’s most powerful wind turbine